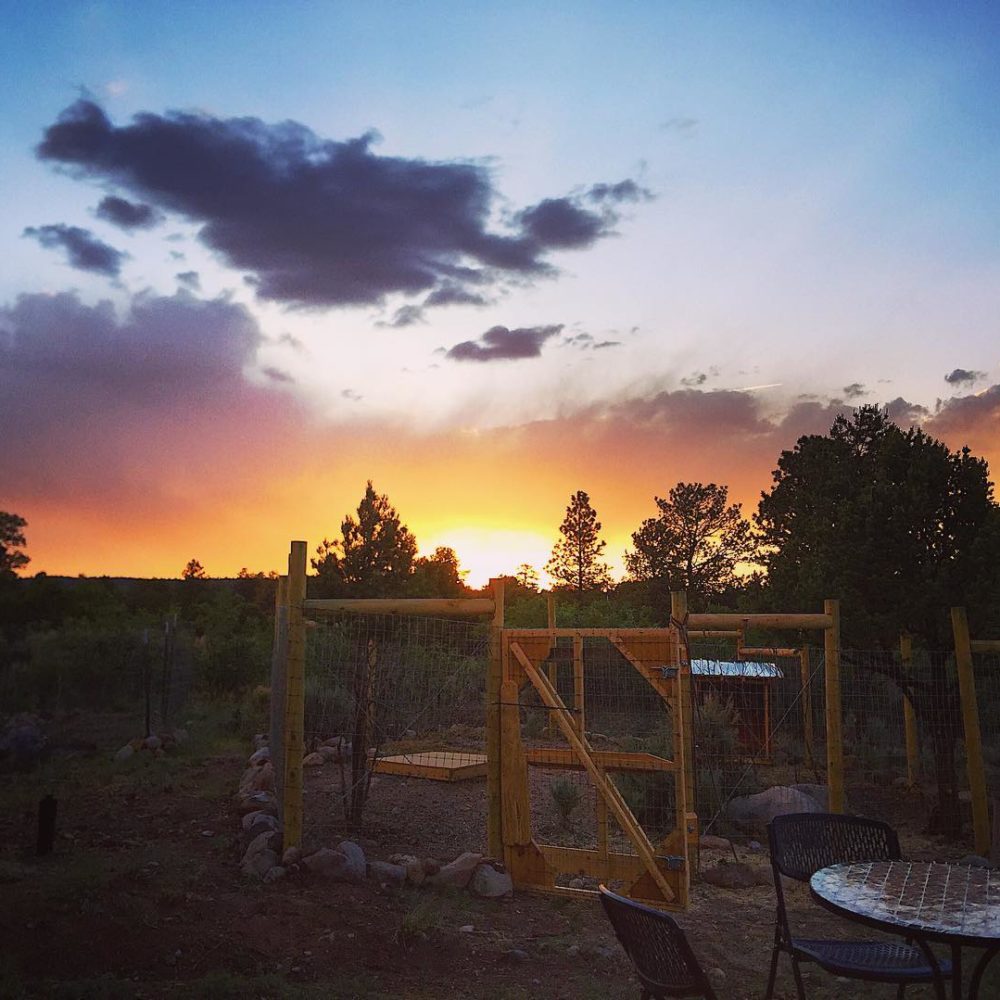 Today, I’d like to tell ya’ll about life in Tres Piedras. In my last post, I mentioned how I’d never heard of this place until March of this year, when I found my little cabin on Zillow. I visited once, did some light internet research on the area, and then decided I’d move here!

Last week, one of my best friends from home (Providence, RI) came by for a quick visit. Dave and his partner Elizabeth were on a road trip from San Francisco to Ithaca, NY, and I was happy to welcome them to my new abode for a night of Thai taco-eating and banjo-playing. The last time I saw Dave was last summer in Spokane, when we threw a bachelor backpacking adventure for Dave’s brother Zach in West Glacier. So, Dave saw the OG Little Goat House, and all the work I’d put into it.

When Dave arrived in Tres Piedras, we reminisced about how just a few months earlier, after I’d viewed the cabin for the first and only time, I had sent a video tour of it to our group chat (entitled “Meatballs,” alluding to our group’s matching meatball tattoos). “Guys, should I sell my house in Spokane, and move to this tiny cabin in rural Northern New Mexico?!” I’d queried. The meatballs are a cabin-oriented group; they are also quite familiar with my disposition toward spontaneity (which some call: “impulsivity”). Support was voiced for cabin life.

And now here I am. Dave and Elizabeth were awed by the beauty of the region, which neither of them had explored before. They hadn’t expected it to be so mountainous, they said. Similarly, my visitors were impressed by the truly remote location of my new home.

Since I moved here, a lot of people in my life have wondered aloud: “What do you do there?” So I’ll tell you. My life here is very simple. I wake up, sometimes I make breakfast, and I spend time with the kitties. I let the goats out, and have morning coffee on the front stoop (site of future front deck) while admiring the Sangre de Cristos. Some days, I go on drives or hikes around the area. I take photos, work on my own writing, and, sans internet, my reading life has become quite active again. Often, I visit the coffeeshop in Taos for digital connectivity. I could go down the street to the Chili Line Depot, just a 5-minute jaunt from the cabin — but the drive from Tres P to Taos is magic. So away to Elevation I go, and the 45 minutes is always worth it, even if I were headed nowhere. I am also, finally, learning to cook!

Everything out here is slower. It’s the Land of Enchantment, but it’s also the “Land of Manana.” The relaxed pace is giving me time to enjoy and create small works of art that are really just part of living. For 2 years in Spokane, I made coffee with a Keurig. About 2 weeks into life here in TP, the Keurig broke, and I’ve been making French press ever since. In Spokane, I often went over to my mom’s for nourishment, due to my lack of dexterity in the kitchen. Now, I practice making meals until I can wow friends with my surprisingly edible concoctions — something I’ve never before achieved! In Spokane, while apartment living, I vowed never again to reside in a home without a dishwasher. Well, the cabin doesn’t have it. In fact, even when I remodel the kitchen, it will remain without a dishwasher, because there simply isn’t room for one. But I take simple pleasure in scrubbing the dishes after each meal, placing them in the small drying rack, and eventually returning them to their homes. There’s something cathartic about the whole procedure.

I caught up with another friend recently via Zoom, whom I originally connected with in Spokane. Another fish out of water in that city, Deva, too, has since blown that clambake! She’s back in her home state of Indiana, and while video chatting she remarked that I looked very happy. I said something about how great it is to be here, apart from society, and how nice I find it to be without internet… except, of course, when I need to get things done!

So what else is there to know, about Tres Piedras? And Taos County?

Well, so many things. First, there’s the fact that almost no businesses accept anything other than cash in this whole county. If they do accept cards, they let you know about it with a hefty surcharge. If they accept checks, don’t try to slip a Bank of America one by them. “We accept local checks only,” the owner of a thrift store explained to me yesterday. “It’s a good check,” I said. “And your license is from Washington??” she raised eyebrows and looked at me sternly. “Are you sure you wouldn’t rather just go down the street to the ATM?” In my brain I thought, What kind of question is that, I’m here now with a good check, no I would not rather.

Eventually, the thrift store lady took my check, but not without first having her employee write my driver’s license number down on the check with a note that it was a Washington ID, and telling me: “I really hope I don’t have to come find you.”

Then, there’s the TP-specific experiences. My cabin is technically in the “Highland Estates subdivision” in Tres Piedras, which if you’ve never lived in a rural place, is probably making you think of big sterile developments along city outskirts, with identical homes and evenly spaced trees.

A “subdivision” here, however, looks more like this: random huts; Earthship-style homes; abandoned build attempts; boarded-up double-wides, still with satellite dishes dangling off the vinyl siding; meth-houses with 10-ft tall perimeter fences; endless dogs guarding yards and dirt driveways that would be impassable anyway; many lots with 10 or 20 vehicles, some boats, dilapidated campers, sitting outside the front windows; horses parked next to llamas parked next to miniature horses in worn-in pens and corrals and barbed wire; and 2 steers in a neighbor’s backyard, in a little fenced area, next to their carport. Another neighbor started building his home in the middle of a county road, my realtor said, and then petitioned the county to let him keep it there. They acquiesced.

So, my first experience with anyone in “Highland Estates”, a few days after I’d arrived.. I was driving in my truck with my mom on the passenger side, down Forest Road 222. We spotted an older gentleman tending his land near the road and, eager to make an acquaintance in the immediate area, we nodded and waved in a friendly manner. When the man motioned for us to pull off to the side for a hello, we obliged. As we approached, I noted his appearance: blue jeans, shirt tucked, big cowboy hat… and a beard that was loosely sectioned into three unruly dreadlocks that reached from his chiny-chin-chin allll the way down to his belly button. I was nearly speechless at the mere sight of the majestic dread-beard, a grooming choice I’d never quite realized existed. Then, the man began speaking with us.

At first, conversation was much what one might expect in a rural town from an elderly White cowboy: talk of the country going to hell in a handbasket peppered with un-requested accounts of personal magnanimity and accomplishments; all without much pause for reciprocal banter.

But then, there was the account of the quintuple homicide. I’m certain our dread-bearded friend didn’t use the word quintuple — in fact, I’d be very surprised to hear anyone express the numeric value of the 2017 homicidal event in such terms (I had to do a bit of fishing myself to land on the descriptive word for five). Regardless, this first man we met, during our first week, proceeded to illuminate us to a colorful odyssey of local murder that we had nary anticipated. My mother’s face went from indulgent to concerned to horrified as I continued nodding and affirming to the man that I was listening to every minute detail he deigned to expound about the crimes over the course of a good thirty minutes.

My poor mom eventually went from horrified to weary, and kept giving me eyes that said, Any day now and you can tell this man we need to go and we can be on our way already… I have difficulty, however, interrupting the stories of the ancient (or anyone’s stories, for that matter), unless there is a good opportunity to do so. This requires a few-seconds-long pause in monologue from the person speaking; the old man did not grant us this favor. I looked back at my mom as though to say: Okay, you go ahead and butt in and tell him we’re leaving, then!

Eventually, though I cannot recall how, we did manage to pull away. The old man kept saying that the perpetrator of the quintuple homicide had done it all just because he wanted to borrow his step-dad’s fancy black truck. I looked down and patted the steering wheel of my black 2016 Silverado, wondering if the man had been trying to send me a not-so-subtle message? His first words were, after all, “Too many damn people moving here — no offense.”

There’s much, much more to say about life in TP, but perhaps for another day. It’s late and this is long, already. Life in TP, PT II, coming soon.