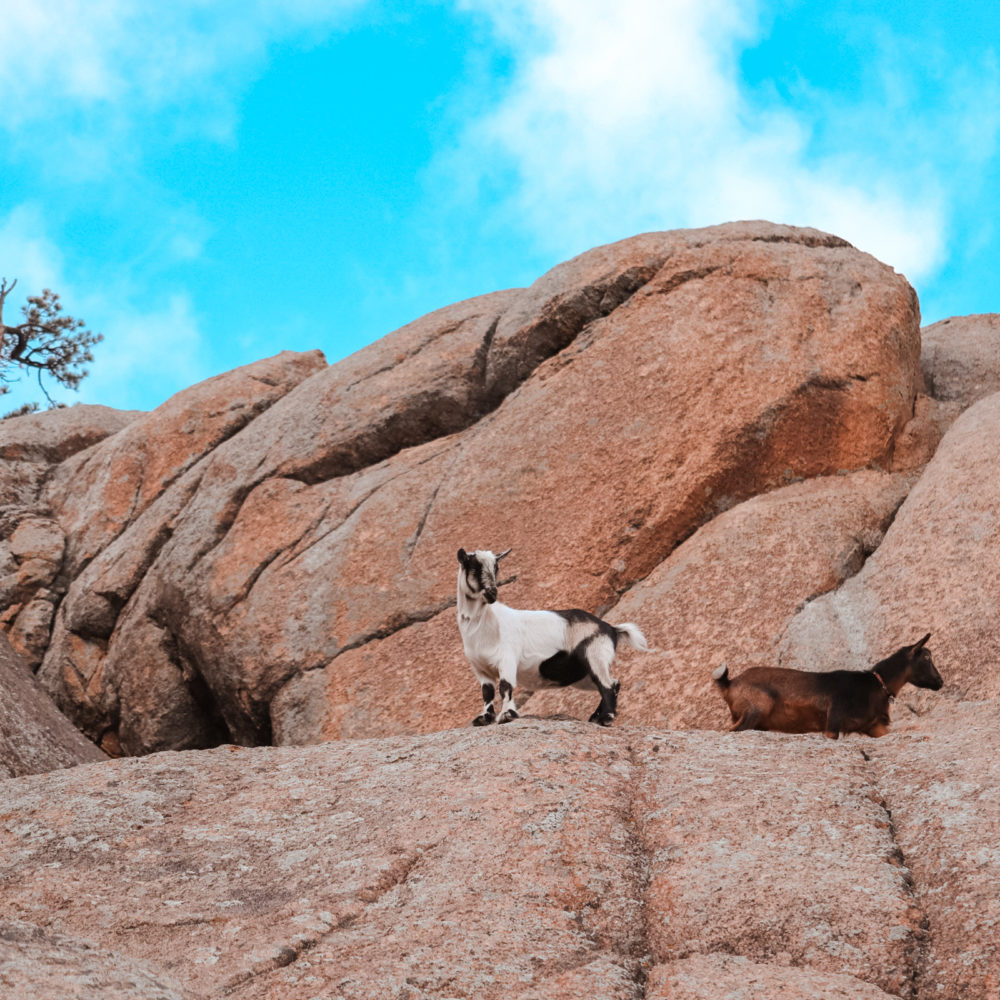 Both of our Nigerian Dwarf boys are named after legendary (if not mainstream) film directors: “John Waters,” and “David Lynch.” For those patrons who are less inclined towards the avant-garde, we just introduce the boys as “‘John and ‘David,'” and concede that their names are Biblical.

I adopted John and David from a small farm in the rural town of Priest River, ID, and brought them home as “kids” (baby goats). The boys were bottle-raised by me, which involved feedings of warm milk every 4 hours until they were weaned, and which resulted in their honorary designation of me as their mother. The goat boys have three sisters, the kitties Petunia and Dulcinea, and resident rescue pup Daisy.

“John Waters” has the Baltimore native, creator of Hairspray, and “filth” icon as his namesake. John Waters the Goat is actually the sweetest boy ever. He was born one week after “David Lynch” the Goat (the boys came from the same goat herd in Priest River, Idaho, but are not biological siblings), and is a total mama’s boy. John Waters loves to snuggle, give air kissies, and is quite amenable to being picked up and held for photo ops. John’s beautiful brown coat is luminous and luxurious, but for some inexplicable reason, John is one of those guys who just can’t grow facial hair! John’s little white tail makes him look kind of like a miniature deer. He is constantly doing this weird yoga-goat stretch with his neck where he will rotate it around 360 degrees, looking back at you at you over his haunches with his head upside down. John Waters the Goat is the creator of this signature move, and he will eat your fingers if you try to steal it — in fact, he might try to eat your fingers anyway, because John loves snacks! This goat enjoys munching so much (shoelaces, your pants, your hair, etc.), we’ve awarded him the nickname of “John the Nibblah” (translation: John the Nibbler, spoken with a New England accent).

“David Lynch” is named after the film icon who inspired a Pacific Northwest cult identity with his television series “Twin Peaks,” and directed other notable films like Mulholland Drive and Eraserhead. David Lynch the Goat is a showman and a performer. This blue-eyed boy loves to strut his stuff, and he knows he’s handsome with his multicolored coat and his majestic flowy beard! David is not so keen on being snuggled or hoisted into the air as John, but he will walk on his hind legs for treats and engage you in a hearty round of goat-jousting to keep you entertained. You can tell that David Lynch is ready to play when his ears go back and his tail perks up and wags. This is David’s way of asking you to head-butt with him, and you won’t be disappointed if you’re looking for a workout! David is very strong, agile, and intelligent, and his pallet is a bit more refined than John’s. If you present David Lynch the Goat with anything less than a delicacy, he may simply turn his nose up and walk away!